A Visit From The Goon Squad in flowchart form...

I love a good flowchart. I like graphs. And lists. And filling in forms. And parallel remote controls. But I really love flow charts.

So, when I finished  the novel 'A Visit From the Goon Squad' by Jennifer Egan yesterday, I thought "I need to make a damn flowchart of that!!" 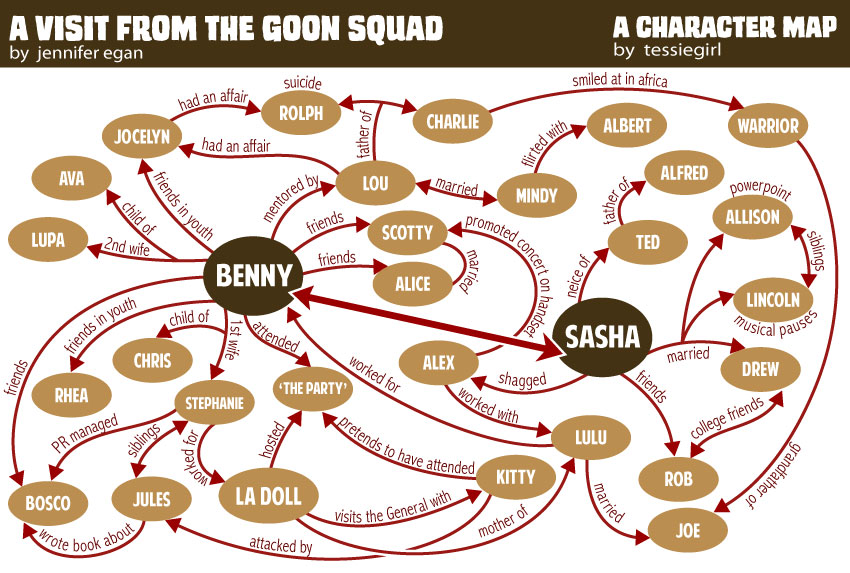 This book was awesome. Music, New York, punk, youth, despair, theft, Powerpoint presentations and a billion interconnecting characters who hook up across decades, continents and time. Ever since I saw Robert Altman's 'Shortcuts', I have loved the seemingly disjointed, that becomes a chain of connections that cross and link back on themselves. Lovetey love, love love.

I also loved the concepts within the book around the passage of time, of ageing, of wondering who you have become and who were you in the first place.

And how awesome is a book with a whole chapter written as a Powerpoint presentation? I'll tell you how awesome- Totally.

If you haven't read the book, I hope you can just appreciate my Character Map as a piece of art. I think the links and connections between us all are beautiful. I would love to  map my friendship group- how we all came to know and love each other, who links to who and in how many ways. then I would love to map Brisbane- the ultimate small town. I love knowing that I have met people who I could have met through one or two totally different people. I have been thinking in Six Degrees of Separation for years... even before Kevin Bacon was the key....

In the mid-late nineties, I became obsessed with a flow chart I created that developed into a concept called The Seinfeld Theory of Reality... One day I will Blog about that... If I feel like exposing even more of my crazy...

x Gillian
Posted by Gillian for Tessie Girl at 20:01